Why Do All New Cars Look Alike?

I look around and all I see is the same car. A different tail light here, different door handle there, but essentially they’re all alike. I can’t tell a Honda from a Lexus from a Chrysler without looking at the logos. As a designer my first thought is, can’t anyone design something different? I mean, where’s the personality? I am forever seeing ads touting “aggressive new styling.” When was the last time you saw an aggressively new styled car?

I did some research and read that a lot of what drives new car design is aerodynamics. Okay, granted, to be more fuel efficient designers strive to decrease wind resistance as much as possible, but come on. I couldn’t imagine that there was so little room in the wind tunnel for differentiation that they all had to be so much alike.

I was skeptical of this aerodynamic silhouette claim, not that I didn’t believe in the science, but I wondered how much influence it had on the actual design. So I chose eight cars at random (no lie) from the internet as my representative sample. I traced the silhouettes of all eight cars, in different colors, and superimposed them and was SHOCKED at how closely they matched. These lines are the actual silhouettes of the eight cars pictured.

Secondly, I know that product and package designers face consumer resistance when designing anything new or innovative. For years laundry detergent came in powdered form in big boxes. When liquid laundry detergent first appeared on the market the response was: outrageous, laughable, weird. Automotive design is no less immune and is prone to follow established convention when it comes to designs the consumer is familiar with, willing to spend $25K+ on and something they are willing to park in their driveway without the neighbors snickering. 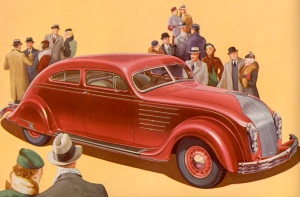 In 1934 Chrysler took a gamble and introduced the Chrysler Airflow and its lower priced counterpart, the DeSoto Airflow. Not only did the radically new designed Airflow lead the way in terms of aerodynamics (or “streamlining” as it was then called), it was the first mass-market car in the world to use the “modern” bodyframe architecture that has now become standard. However, as modern as the Airflow was, it wasn’t accepted by the buying public and the car was only in production for four years. The public was simply not ready for such a major change in automobile design. Chrysler must still be given credit for continuing with innovative design with their PT Cruiser, Crossfire and 300 Series.

There are some current exceptions in this play-it-safe world, with a few cars, the Mini Cooper, Nissan Cube and Scion iQ (ala Smart Car) as examples, that are targeted to younger consumers who are more willing to accept new ideas. But my feeling is that to appeal to a broader audience and decrease the risk of consumer rejection, especially in a recession, auto manufacturers will continue to play it safe and design cars that conform to current trends.

28 responses to “Why Do All New Cars Look Alike?”