The ‘UP’ Film Series 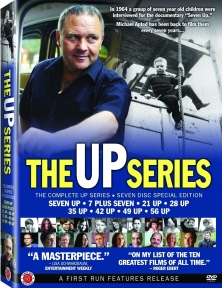 I first discovered this documentary series in 1985 when 28 Up was released in the US. I had never heard of the film but a friend who was working in the industry suggested we see it.

The Up Series is a series of documentary films produced by Granada Television and originally broadcast on the BBC that have followed the lives of fourteen British children since 1964, when they were seven years old. So far the documentary has had nine episodes spanning 56 years (one episode every seven years). The series topped the list of The 50 Greatest Documentaries. The children were selected to represent the range of socio-economic backgrounds in Britain at that time, with the explicit assumption that each child’s social class predetermines their future. Starting in 1964 with Seven Up, The UP Series has explored the Jesuit maxim, “Give me a child until he is seven and I will give you the man.” The original concept was to interview 14 children from diverse backgrounds from all over England, asking them about their lives and their dreams for the future. Every seven years, renowned director Michael Apted, a researcher for Seven Up, has been back to talk to them, examining the progression of their lives. 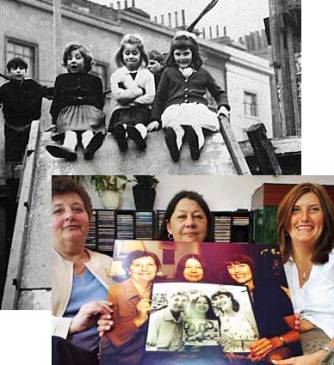 It is surprising that only two people have dropped out of the project and one person has died. One gets the impression that the remaining group’s participation is motivated by a mixture of sanguine acceptance, pride and a sense of duty to the project. The group was not meant to represent an entire cross-section of society; Mr. Apted hastily and arbitrarily chose the children from among schools he contacted at the time. There was no intention to continue the project as a series. In retrospect, Mr. Apted regrets the shortsightedness of his decisions, especially the gender imbalance of having only four women.

An astonishing, unforgettable look at the structure of life in the 20th century, The UP Series is, according to critic Roger Ebert, “an inspired, almost noble use of the film medium. Apted penetrates to the central mystery of life.” The latest installment, 63 Up, premieres in theaters this week and previous episodes are available on DVD. Rush to see it and binge watch the previous films.

Tintin and the Ligne Claire Style 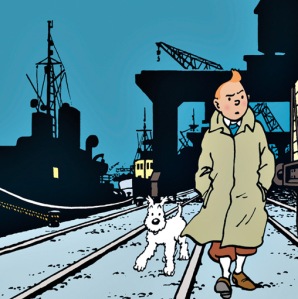 On the eve of the release of the first big-screen Tintin movie, I have just one thing to say to those unacquainted with the intrepid young reporter and his faithful dog, Snowy: buy one or two The Adventures of Tintin books and start reading. Get the original, large-format paperbacks. If you have children, especially around the ages of 8-10, now is also the perfect time to introduce them to this wondrous world of high adventure in exotic lands.

The Adventures of Tintin has been translated into over 50 languages and is loved the world over but mostly unknown here in the U.S. It remains to be seen if the new Steven Spielberg/Peter Jackson film will capture the hearts of an American audience in the same way the comic novels have for the rest of the world for the past 75 years.

The new film is rendered with the latest 3-D, motion-capture technology of current animated movies, but the original comics on which the film is based was rendered in a style of drawing called Ligne Claire. French for “clear line,” the style was pioneered in the 1930s by Tintin creator Hergé. It uses clear strong lines of uniform weight and importance, paying equal attention to every element depicted. Contrast is downplayed and the artist does not use shading or crosshatching. The style features strong colors and a combination of cartoonish characters against very realistic backgrounds. This combination allows readers to more easily identify themselves with the characters: one set of lines to see, another set of lines to be. Cartoon characters are universal because the more cartoony a character is, the more people it could be said to describe. Tintin represents the everyman.

In Scott McCloud’s Understanding Comics, he explains cartooning as a form of Amplification through Simplification. “When we abstract an image through cartooning, we’re not so much eliminating details as we are focusing on specific details. By stripping down an image to its essential ‘meaning,’ an artist can amplify that meaning in a way that realistic art can’t.” In the same way that the design principle of less is more emphasizes the simplicity of a design’s intent more powerfully than complexity, so too does the Ligne Claire style of cartooning emphasize the ideas behind the forms. Read the related article on Less is More.

If you don’t know where to begin in the world of Tintin, here is a quick reference guide of a few of over 20 titles: 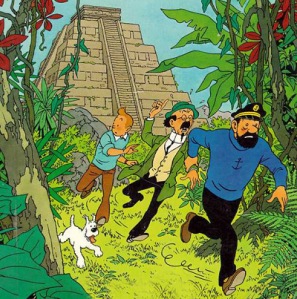 The Resurgence of Letterpress Printing 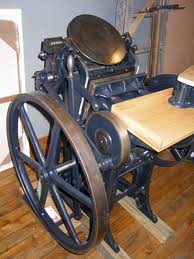 The current resurgence of letterpress printing may puzzle many techies. Like saying blacksmiths and haberdashers are really making a comeback. But it is true, letterpress (platen presses and handset type) is being celebrated again after what was thought to be its extinction. Designers love it for the hands-on experience of creating something in the physical world and consumers love it for the feeling of old world charm and exclusivity it connotes. The growth of letterpress workshops and classes has exploded all over the country and many art schools are now offering these classes. I soon hope to have a guest post from a friend who is currently taking one of these classes.

In reading about this I came across a documentary called Typeface, a film by Justine Nagan, about the Hamilton Wood Type and Printing Museum in Two Rivers, WI. The film chronicles the preservation of and renewed interest in handset type at one of America’s great wood type printing companies. Old timers who used to work at Hamilton mix with graphic design students from Chicago who travel 175 miles north to Two Rivers to participate in workshops and use the museums working presses. It’s a fascinating look at an analog craft once thought long-dead that has been rediscovered by a digital age generation that had never known it.

The DVD is well worth purchasing, especially for the typophiles among you. I bought a copy and enjoyed it very much.Watch the trailer of the film here.

Looking at this picture of the California Job Case instantly brought back memories of this phrase: Be Careful Driving Elephants Into Small Foreign Garages.

It’s one of many mnemonic devices that Mr. Little, my junior high school printshop teacher, taught us as a way of remembering the compartments in which the movable type for letterpress printing was stored. It was in this class that I first fell in love with the “graphic arts.” Thank you, Mr. Little.