The Art of the Album Cover 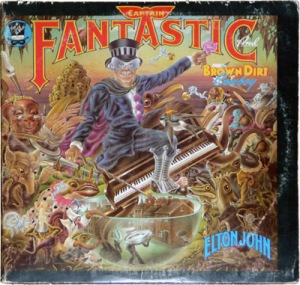 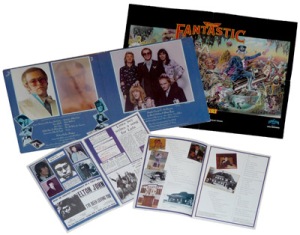 This was the heyday of the concept album—the theme of Captain Fantastic being a recounting of Elton and Bernie’s struggling early days—and this album was chock-a-block with all manner of goodies: inserts, a double cover with photos of the band, a wall poster and two 16-page booklets, one of lyrics and photos and one of memorabilia of their early career, an unheard-of feast for any fan. I spent hours flipping, playing, and feasting on every piece of minutia.

For decades nothing could match the creative frontier of the vast, one-foot square piece of real estate the LP afforded. A perfect marriage of two distinct media, art and music, combined to become not only a marketing tool to sell music, but also a powerful form of social commentary. Musicians and artists used the medium to produce iconic images that captured the zeitgeist of their generation. Many readers can easily recall album covers that stir memories of a certain time in their life and that have no doubt come to symbolize that period, especially during one’s high school and college years.

In 1982 the first CD was released, which shrank the available real estate to a 4 3/4″ square, and in 2001 the iPod and digital downloads further reduced the cherished artform to a 1″ thumbnail and rendered album artwork all but irrelevant. The budget allowance for development of album artwork for a major record label also shrank from $100,000 per album at its peak to under $10,000 today. It’s not just that technology has changed cover art, it’s that the youth culture that drives all new music has changed. Music no longer functions as the only source for their self-schema. In the past, youth used musical subcultures as role models and guides to determine how they saw themselves in the world and how they differentiated themselves from their parent’s generation. If music matters less to the way youth define themselves today it’s because they have social media to do the job. This powerful new medium has replaced much of what was the only form of expression for previous generations. And with the decline of music’s preeminent role in youth culture, so declines the need for the iconic art that helped define it.

I don’t want to sound like one of those people who bemoan the passing of the telegraph or the buggy whip but I will miss my feasts.

I have a confession to make. I sometimes shop at Big Lots. To borrow a quote from Henry Higgins, “It’s so deliciously low.” The odd mix of brand names, knock-offs and cheap Chinese-made products always make for a singular shopping experience.

The food aisles are my favorite. Sometimes they’re filled with delightful imported cookies, tea, and jam; sometimes with closeout products that, for whatever reason, didn’t make it at the grocery store. One item I found that sounded delicious but looked awful was this Nature’s Path Organic Flax Plus Pumpkin Raisin Crunch cereal.

I can’t help but think that the reason this cereal ended up as a Big Lots closeout was that the packaging was just so damn ugly. I mean, whose idea was that? The purple and yellow color scheme is a complete disconnect from the product category. In Rob Kaszubowski’s article, How To Use Color in Food Packaging, he explains that food packaging uses characteristic colors that are associated with the products inside. Orange juice containers aren’t blue, they’re orange. When thinking about cereal, one thinks of healthy, vitamin-enriched whole grain. Orange, yellow, red and brown are all colors typically associated with cereal and used predominately in most cereal packaging. This purple package has none of that association. If I covered up the type and spoon, I think you’d be hard pressed to guess what was inside.

Nature’s Path’s website says, “We’ve had a makeover. Our packaging has changed.” And not a moment too soon. I’m guessing that the failure, sorry, “lack of sell through” on many of their otherwise delicious cereals prompted some market research, focus groups and a search for a new package design team. My guess was correct when I read a recent article on Natural Products Marketplace’s website explaining that Nature’s Path’s previously inconsistent packaging designs prompted them to hire a renowned packaging research firm to make sure their new packaging and logo redesign would appeal to consumers. I think you would agree that the new design is a considerable improvement over the old.

It’s just too bad I won’t be seeing any of their cereal for a buck a box in the closeout aisle at Big Lots anymore. Nature’s Path couldn’t be happier. 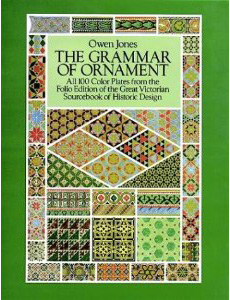 Let’s say you need a Greek-looking border design for a menu project and a Chinese floral pattern for a wedding invitation. And you need a Celtic knot design for a tattoo sketch and some Tuscan ornamental motifs for a brochure. Plus you need Egyptian-looking graphics for a scented candle package and some Arabian calligraphy for a book cover design. You’ll find them all in one great book: The Grammer of Ornament by Owen Jones. Published by Dover Books, this classic is an excellent resource for fine artists, illustrators and graphic designers who need copyright-free reference materials of historical ornamental design. This is one of many wonderful Dover Publications containing thousands of beautiful color layouts of authentic design motifs. I use the word authentic to emphasize that these are actual historical designs and not just modern facsimiles of the genres.

I have lost track of the times I’ve reached for this book for design inspiration. Most recently I needed to design invitations to a 300-person event being held at an estate built to resemble an Italian villa in Tuscany. The Grammer of Ornament was its usual rich resource for the decorative Renaissance art that I used and modified in my invitation design to capture the mood of the event’s venue. When I worked in the Barbie Collectibles division at Mattel I used this book extensively for my package designs for the Dolls of the World collection. I created dozens of these packages over the years incorporating elements from this book that captured the time periods and exotic locales that matched the themes of this series. When I worked for a greeting card company I used decorative elements from this book for calendars, coffee mugs and stationery products.

Of course you can always do a Google search for images you might need, and find things similar to these images, but nothing will compare to the incredible array of content in this book. Now I know a book is so 20th century and this one is no longer in print, but The Grammer of Ornament can be purchased from an online used book retailer such as Amazon. I’ve had my copy for almost 20 years and I’m still finding new gems within its pages.