The Marston House and the Arts & Crafts Movement 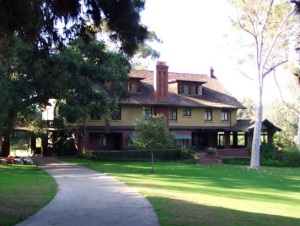 On a recent trip to San Diego I had the opportunity of touring the historic Marston House. Built in 1905 for wealthy local merchant and philanthropist George Marston, this unique home is a prime example of architecture from the Arts & Crafts Movement. Our tour was led by an enthusiastic and knowledgeable docent and lasted over an hour. It may have been because we arrived mid-week but my companions and I were the only participants of the tour so it really felt like a private showing.

I am a great lover of the Arts & Crafts Movement and have toured many Craftsman homes in California. I felt this home’s exterior lacked the beauty of similar turn-of-the-century Craftsman-style homes that tycoons had built for themselves at the time in Southern California. The Gamble House in Pasadena — an architectural masterpiece by Greene & Greene — is an example that comes to mind. The home’s interior, however, is a fine example of the genre and is filled with a large collection of Gustav Stickley furniture. 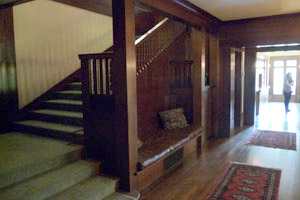 I could detail at length all my observations of the house but of particular interest to me were the closets. More on this in a moment. Following is an excellent example of how technology and scientific advancement can drive design. The Germ Theory of Disease, which proposes that microorganisms are the cause of many diseases, may seem like an obvious idea today but was a new and highly controversial concept in the 19th century. Once accepted by the general public many steps were taken to increase hygienic practices in the home and much was written on the subject. It was also believed that a dust-free and well-ventilated home promoted good health. Ornately carved Victorian furniture and heavy tapestries and drapery that could trap dust were considered anathema to these ideals. Edward William Godwin (1833–1886), one of the originators of the movement, deplored “fluff and dust as two of the great enemies of life.” 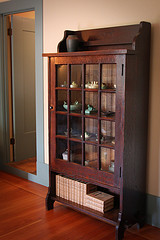 So back to the closets. Mr. Marston subscribed to all these modern new ideas about hygiene and had all the closets in the Marston House built to have a two inch raised floor to prevent dust from entering the closet from the adjacent room. One would therefore step up into each closet. See photo, left. All the closets also have a window that can be opened onto an adjoining hallway or bedroom to facilitate the free flow of air in the closet. This concept of the free flow of air as promoting health was also manifested into the screened sleeping porch, a ubiquitous feature of many Craftsman homes of the time. The Marston House also features a sleeping porch. 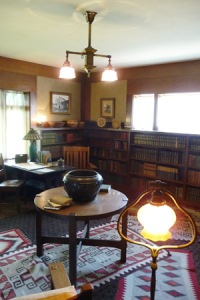 This is an excellent tour worth attending for any architecture, Arts & Crafts or history buffs. The Marston House tour can be done in a few hours.