Beginning this year I will be featuring guest bloggers from time to time. I hope you will find their articles as interesting as I do.

GROWING UP I REMEMBER my love of books; I was fascinated with history and the natural world. Like most boys my age, I loved dinosaurs. I must have positively worn out the pages of grandmother’s encyclopedia The Book of Knowledge on dinosaurs and deep-sea diving. When you’re ten-years-old, that sort of thing was über cool. That was until the day I discovered on a shelf in a library at Western University a book about ancient Egypt. It was a life-changing event. I spent hours pouring over the real-life exploits of Howard Carter and his discovery of the tomb of the boy king, Tutankhamen (c. 1922).

Carnarvon: “Can you see anything?”
Carter replied, “Yes, wonderful things.” 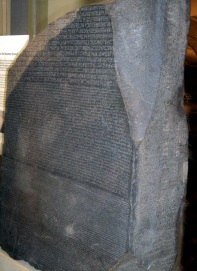 My love for all things Egyptian has not diminished. In 2010, I traveled to London to visit the British Museum and view the Rosetta Stone. Prior to its discovery in 1799 by Napoleon’s scientist, Egyptian hieroglyphs remained undecipherable. The Rosetta Stone, an unassuming plain black basalt rock was inscribed in three languages: Greek, Demotic and hieroglyphs. The Rosetta Stone held the key; for the first time, scholars could read the lost words of ancient Egypt.

Few Ideas in history leap from the brain fully formed. No invention, innovation or contrivance yet conceived by humankind ever occurred in a vacuum. All great ideas are evolution not revolution. A gradual progression of logical thought based on what came before. True innovation is putting the parts together. Consider, for example, our unknown primordial ancestor, that most clever fellow who first rubbed two sticks together to discover fire making. The bits and pieces were all there beforehand, sticks (fuel) and physics (friction), where the true innovation came was with the idea, utilizing the tools at hand in order to create something that is altogether different, greater than the sum of its parts.

Imhotep, (2667 BC – 2648 BC) was chief architect to the third dynasty Egyptian Pharaoh Djoser (2630 – 2611 BC). Imhotep designed the world’s first known monumental stone building, the step pyramid at Sakkara and he is the first architect we know by name. Imhotep, whose name means: “He who comes in peace,” remained largely a mythological figure in the minds of most scholars until the discovery of a broken stone pedestal which established him as a real-life historical person. 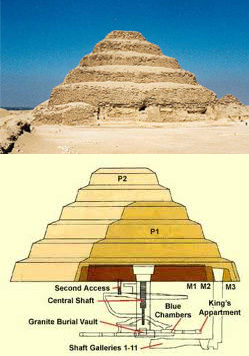 The step pyramid of Sakkara remains today one of the most brilliant architectural wonders of the ancient world. Imhotep didn’t invent working in stone; he was, however, the first architect who ever attempted to work stone on such a monumental scale. The pyramid itself began as a simple mastaba. The word mastaba comes from the Arabic word for bench, a low rectangular structure with sloping sides and a flat roof. Prior to Imhotep, all Egyptian pharaohs were buried in mud-brick mastabas. The genius of Imhotep, the great leap, was his use of stone. This process began gradually, as Imhotep experimented with building techniques. As his skill increased, he became more confident, and he continued to update his design by stacking one course of stone on top of another like a wedding cake.  The resulting structure topped out at 64m high and was nothing short of revolutionary!

Judged on its engineering merits, ultimately, the step pyramid as a burial chamber complete with its hidden maze of underground tunnels to discourage grave robbers, failed  in its primary design: to protect the king’s mummy. The tomb was plundered and all archeologists found of Djoser was his mummified left foot. Imhotep’s revolution, however, left a lasting legacy as the step pyramid sparked a 200 year frenzy of pyramid building culminating with the construction of the Great Pyramid at Giza (c. 2560 BC). As for Imhotep himself, his lost tomb remains one of Egypt’s last great undiscovered secrets.

Steven Mc Allister is a military historian, film critic and a sometime humorist. He enjoys cooking for friends, drinking beer and smoking a fine cigar. He resides in Michigan where he lives quietly with his three fat dogs. He is currently working on his third novel.