Symbolic pictograms have been around for thousands of years—a few ancient ones still survive to this day—because they possess the power to communicate complex ideas at a single glance, a type of visual shorthand which affords us a simple way to say complicated things. In fact, they are so much a part of our popular culture and commerce that we usually don’t give them a second thought.

Art is a form of symbolic thought, the earliest examples of which were found in caves in Northwest Spain. Paintings on the cave walls, dated at 40,000 years old, depict animals and even stenciled hand prints of the artists. These are what I would call icons, images with a physical resemblance to the thing they represent—different from symbols, images with no relation to the thing they represent. An icon depicts a thing, a symbol depicts an idea.

One of the oldest symbols still in use today is the caduceus, or staff of Hermes, which dates from the time of the ancient Greeks. It is often mistakenly used as a symbol of medicine, 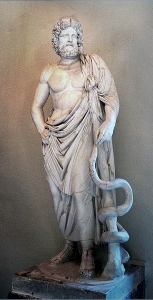 Greek god of healing and medicine. Statues, friezes, and coins depicting Asclepius with his staff date from the early 4th century BCE. The symbolism of the serpent has been interpreted in many ways, one being the snake’s shedding of its skin, symbolizing rejuvenation. The caduceus, by contrast, properly symbolizes trades and occupations associated with Hermes, notably commerce and negotiation, two realms in which balanced exchange and reciprocity are recognized as ideals, thus the two snakes. Additionally, the printing trades can also be added to the list of trades due to Hermes’ role as a messenger.

The barber pole, with its familiar helical stripes, is a bit more modern and dates only as far back as the Middle Ages. Also associated with the medical profession, barber-surgeons performed all manner of surgery, and because they were the ones with the sharp instruments, also cut hair and beards. The red and white striped pole, representing blood and bandages, blue symbolizing the veins, was an easily recognizable sign for a mostly illiterate populace.

When the professions of barber and surgeon were officially separated in the 17th century the pole, sometimes using red, white and blue stripes, became the barber’s official symbol.

In fact, the mere use of a striped graphic motif can be enough to communicate anything barber-related, a powerful example of the use of symbols to communicate ideas. 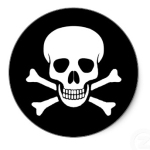 The skull and crossbones is another symbol with origins in the distant past. Some of the earliest uses of skulls and crossbones was to denote the entrances to cemeteries and may also have been a warning not to enter for fear of contracting diseases like the Black Plague.

The practice dates back many centuries, first with the use of actual skulls and bones and then with carvings of the same. Universally associated with the concept of death, the symbol began to be used to label poisonous substances in the early 19th century and by the 1880s was adopted around the world as the symbol for poison.

It is still used today. The symbol is so ubiquitous that this humorous Hello Kitty design is an instantly recognizable homage.

The Jolly Roger pirate flag has a different origin. The flag was often flown to encourage the pirates’ victims into surrender without a fight. Having the reputation of fierce cutthroats gave most pirates the edge when it came to attacking a ship, and flying the flag on their mast aided in striking fear into their prey.

The origins of the flag are a mystery. Pirates originally used a red flag, which was also common in naval warfare, to signal that no quarter, meaning no mercy, would be given. This red flag was called Joli Rouge (pretty red) by the French, and may have been corrupted into English as Jolly Roger. The term was already in use by the 1720s. The black flag of quarantine and disease, combined with the universal symbol for death, the skull and bones, may account for its evolution, as depicted in this etching from 1724. The skull and bones was also used in captains’ logbooks to indicate the death of a sailor.

The universal symbol of pawnbroking is three gold balls suspended from a bar and is one of the most recognized in the world. Oddly, no one I asked in my informal poll seemed to know what the symbol was. This is an example of an antiquated symbol that survives in modern times but holds no currency, perhaps because of pawn shops’ unfair association with crime. 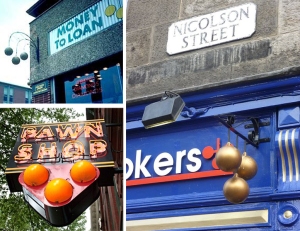 This business model of loans being offered to people who traded their personal property as collateral existed in China 3000 years ago and is no different today. One of the most famous pawns in history is that of Queen Isabella of Spain, who is said to have pawned her jewelry to finance Christopher Columbus’ first voyage to the New World. The Medici family banking empire in Florence, Italy, in the 14th century, along with the Lombards in England, were the moneylenders in Europe. 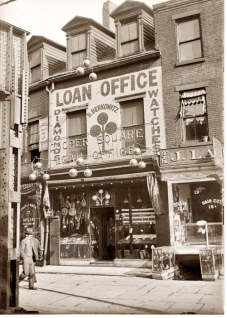 The “three balls” may have originally symbolized coins and were used as signs hung outside money lending establishments.

St. Nicholas is the patron saint of sailors, merchants, archers, thieves, children, and pawnbrokers—an interesting mix of characters. The pawn symbol has been attributed to the story of Nicholas giving a poor man’s three daughters each a bag of gold so they could get married. 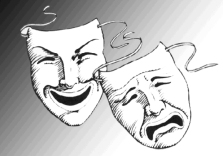 Another symbol dating from ancient times and still in use to day is the comedy and tragedy masks. The origins stem from ancient Greece when actors on stage wore masks with exaggerated facial features in order to be easily seen in the large, open-air amphitheaters. Their use also allowed them to play multiple roles, including female characters, since only men were allowed to be actors. The sock and buskin are also two ancient symbols of comedy and tragedy. In Greek theater, actors in tragic roles wore a boot called a buskin, that elevated them above the other actors.

The actors with comedic roles only wore a thin-soled shoe called a sock. Thalia, the muse of comedy, is often depicted holding the comic mask and wearing socks. Melpomene, the muse of tragedy, holds the tragic mask and wears buskins. Some people refer to the masks themselves as “Sock and Buskin.” This colorful mosaic from Hadrian’s villa (2nd century AD) shows comic and tragic masks.

Our modern word hypocrite comes from the Greek hypokritēs, a stage actor who wears a mask, hence, one who pretends to be what he is not.

There are two symbols most commonly associated with the pharmacy profession. One is the mortar and pestle. Pharmacists would use the mortar and pestle to crush and mix ingredients to cure diseases. The other is the Rx symbol. According to most sources, the Rx symbol originated in medieval apothecary manuscripts as an abbreviation of the Latin word recipe, meaning “to take.”

Medieval prescriptions invariably began with the command to “take” certain materials and compound them in specified ways. ℞.

Many who have traveled in Europe will recognize the Green Cross as the symbol for pharmacy. The Green Cross was first introduced as a pharmaceutical symbol in continental Europe in the early 20th century as a replacement for the Red Cross.

The Red Cross, previously used by some medical institutions and pharmacists,

was adopted by the International Red Cross in 1863, necessitating the need for an alternative. The Green Cross was not used in Britain until 1984, when it was adopted by the Royal Pharmaceutical Society of Great Britain as a standard symbol for British pharmacy. 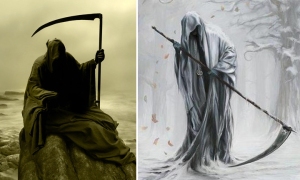 The concept of Death as an archetype or sentient entity has existed in many societies since the beginning of history. In English, Death is often given the name Grim Reaper and, from the 15th century onward, came to be shown as a skeletal figure carrying a large scythe and clothed in a black cloak with a hood. He serves to sever the last ties between the soul and the body and to guide the deceased to the next world. In some cases, the Grim Reaper is said to actually cause the victim’s death, leading to tales that he can be

bribed, tricked, or outwitted in order to retain one’s life. Ancient Greeks found Death to be inevitable, and, therefore, he is not necessarily represented as evil. His name is Thánatos and is often portrayed as a bearded and winged man, but has also been portrayed as a young boy. Death is personified as female in many cultural traditions such as Śmierć from Poland, Pesta from Norway, and Mictecacihuatl in Aztec belief.

Because of our natural aversion to death, he is often portrayed comically in popular culture as a way to divest him of his power. These images from The Simpsons and Family Guy show that, even as a comic character, his persona and what he represents is unmistakable.

A 20th century symbol that just recently lost its reference to its original meaning is the film strip. Film as a physical medium is now almost extinct. Historically depicted with its iconic sprocket holes, camera and movie film has gone the way of other casualties of the digital age like vinyl records and cassette tapes; however, the film strip symbol’s cultural references continue in the collective psyche even though they no longer represent any real film, it all being digital information.

Film photography as a discipline is now taught in college as an artistic novelty and motion pictures are now shot digitally and delivered to theaters on hard drives, not in film canisters. So even though no one uses film with sprockets anymore, the symbol endures in advertisements for photo-related products, in logos for wedding photographers, on stock photo websites, and on posters for film festivals. It ironically retains its power as a visual shorthand even though the company most synonymous with photography, Kodak, has become an historical footnote.

Related to this subject, the same is true for the sound that a digital camera or smartphone camera makes. The click-clack sound imitates the sound of a film camera’s shutter release, and the click-spin was the sound of an SLR camera’s autowinder, both sounds now artifacts of an analog age. But the familiar sound endures — it is what I would call an aural affectation and would argue that had the camera been invented today, its sound would no doubt be a simple beep or ping. If you ask someone today why the smartphone makes the camera actuation sound as it does, most would not know. 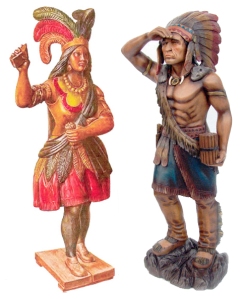 One final and more esoteric symbol from the past that remains in use today is the cigar store Indian or wooden Indian. As with many symbols from the past, the cigar store Indian was used as an advertisement because of the general illiteracy of the populace. Early store owners used descriptive emblems or figures to advertise their shops’ wares; for example, barber poles advertise barber shops, mortar and pestle advertised apothecaries and the three gold balls represent pawn shops. American Indians and tobacco had always been associated because American Indians introduced tobacco to European settlers, and the depiction of native people on smoke-shop signs was almost inevitable. As early as the 17th century,

These figures are still used outside many tobacconist shops today but have fallen out of favor due to cultural and racial sensitivity.

All these graphic symbols have survived, many for millennia, because they share a common characteristic — their ability to communicate a complex idea in a simple way, a way that transcends language, culture and even time, just as modern-day company logos function to symbolize that company’s image, philosophy, and identity. But these symbols are different in that they will continue to exist long after many companies fade into history.